Original recipe was Baked Corned Beef and Hash from Woman’s Day Magazine. Read how I changed up the recipe and renamed it. A great recipes with a bit of deli pastrami instead of corn-beef for St Patrick’s Day meal!! 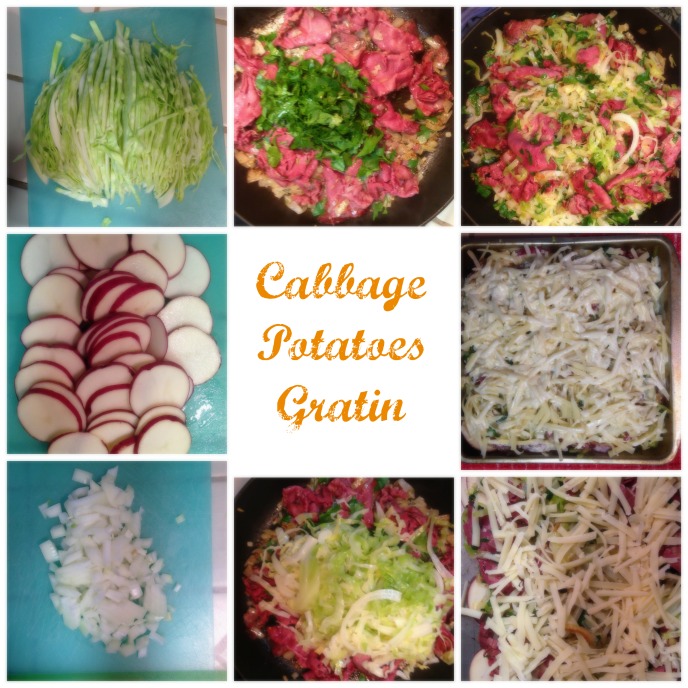 I found the original recipe in March 2015 Woman’s Day Magazine, I loved all the ingredients, but when I went to shop I decided to buy pastrami instead of corn beef from the deli and I also used red potatoes instead of russet potatoes.

I didnt know from the recipe what *Gruyère cheese was until I hunted for it in the specialty cheese bin at the store, I discovered it is a harder “Swiss cheese”, and has more flavor. It was much easier to grate as you can see in the picture.

The original recipe called for corn beef and I switched it to pastrami.

When I added the pastrami to the pan to heat, it curled as you can see in the picture. The taste was wonderful.

3.1
http://ohmyheartsiegirl.com/baked-pastrami-cabbage-hash/
Because I used more ingredients than the recipe called for, (Im always wanting more) so it stood taller in pan, to keep foil from sticking to cheese I created a foil tent for my pan. (I’m sure I’m not the first that creates tents)

*Gruyère is a hard yellow cheese, named after the town of Gruyères in Switzerland, Gruyère cheese is sweet but slightly salty, with a flavor that varies widely with age. It is often described as creamy and nutty when young, becoming with age more assertive, earthy and complex. When fully aged (five months to a year) it tends to have small cracks which impart a slightly grainy texture.