Old Fashioned Experiences I was sharing with my family the other day and what I have been reading about on several blogs and I see on Pinterest. That would be homemade washing soaps.

Well first let me tell you my story when I was learning to wash with my grandma and how she did her washing using a wringer washing machine. For some of you of reading wringer washer, you may not know what one even looks like or how they work. I had the first-hand experience as I grew up in the 50’s, yes dating myself here, that’s ok, I love to reflect. Anyway, wash day was really a lot of work, but I enjoyed helping my grandma for a little while.

First, the washer came with a wringer on the top that was used to squeeze the water from the clothes and could be moved over the tops of the rinse tubs. 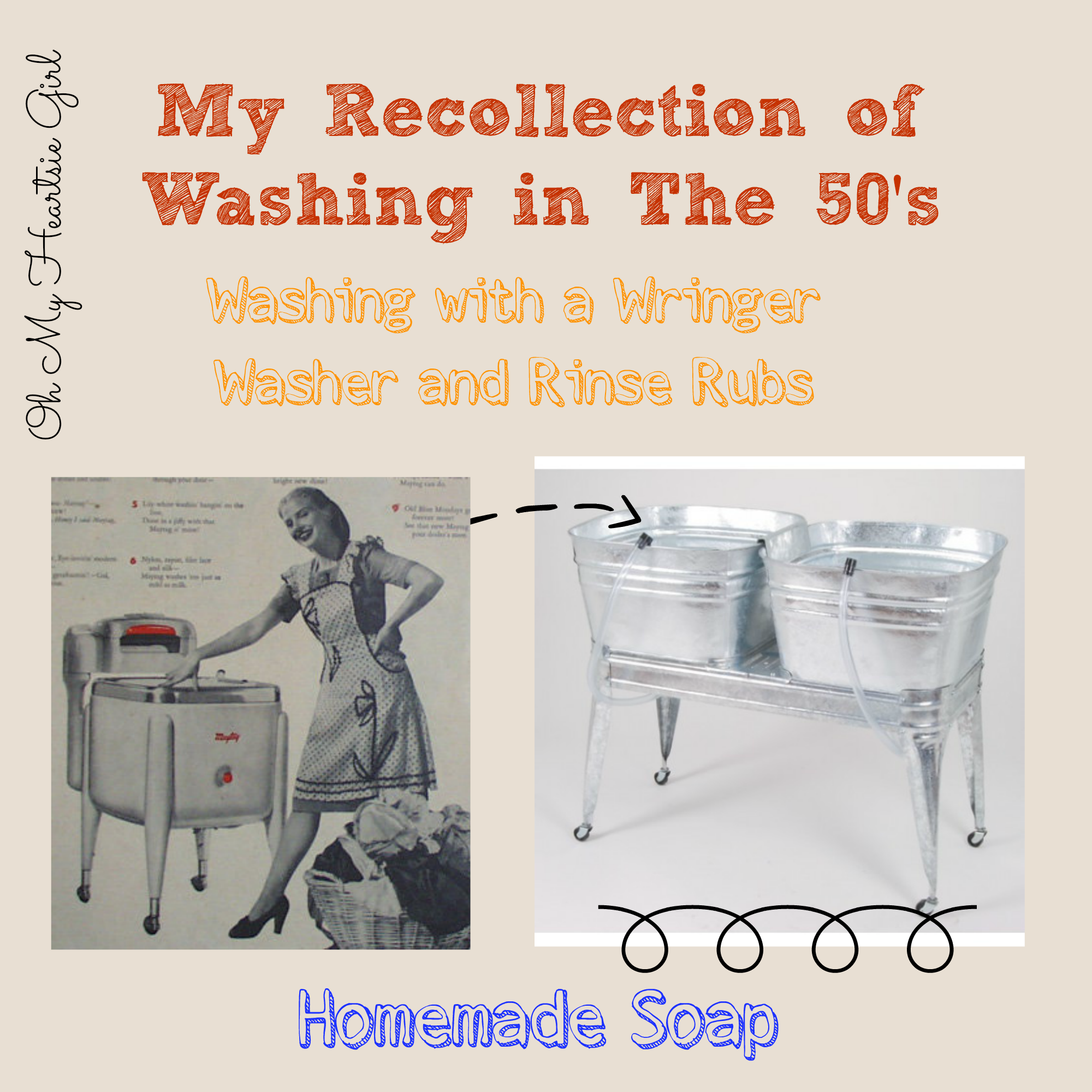 She used to set up her wringer washer or (Mangle Machine)  along with two washtubs for rinsing. She would fill both the tubs with cool water and the washer with hot. So how this all worked was and as I remember, she would fill her washer with the hottest water and add her homemade lye soap. She would turn it on and it would make a good suds on top, and she would wash her whites first, that would be her underwear then towels then sheets for like 10 minutes now keep in mind this type of washing was all manual, so the next step was to use the wringer on the top (the two rollers mounted on the machine) she would run each piece of clothing through the wringer, which would squeeze out the water, and let the cloths drop into one of the rinse tubs. She would rinse the clothes by moving the clothes up and down removing the soap and from there, she would turn the wringer to the next tub and wring the clothes and they would move into the next tub, rinsing as mentioned. So clothes were rinsed twice manually and a final wringing before hanging them to dry.

After she washed all her whites, she would change the water and start over for all her darks. So this was before dryers and all clothes, sheets, and towels had to be hung outside on a clothesline to dry, summer or winter. Yep, she used to hang clothes or sheets when it was freezing cold, they would literally freeze-dry, but boy did they smell good. She did have an indoor clothesline though and used it often for the clothes when it was too cold to go outside, but I can remember she would wear “galoshes” when she went out in the snow to hang her sheets.

Now for the part I wanted to tell you about was the soap that she used to make and use in all her washing “Lye Soap.” It was made of rendered fats from a lamb that was raised on my grandfather’s farm. So the ingredients were, lye, water, and lard to make her soap and I was not allowed to be there while she made it for my protection, but I do remember after it was made it had to go into wooden boxes to cure, going through a chemical reaction called saponification, then she would cut them into manageable bars and when she would use the soap she would grate it so it would dissolve.

I have been seeing numerous Pins on Pinterest about making homemade soap and because the process above does not sound good to me so I have found recipe that uses lye soap already made, and because I like to give owners of small businesses my money, I went right to Etsy and found and ordered some lye soap, when it comes I will be making my own soap, a different recipe than my grandmother used but I think it will do nicely. For the recipe, I went straight to Pinterest for a recipe (would I look anywhere else?)

Also rather than this being a dry soap, it will be a gel, I can measure and use for my wash. I’ll see how this goes. The Lye soap I ordered was from Simply Creative Living on Etsy.

If you would like to take a look at the recipe and ingredients that uses already prepared lye soap or Fels Naptha I found the recipe at Appalachia Heritage and of course she writes more pioneer recipes as well, I have spent quite a bit of time on her blog.

The rest of the ingredients, washing soda, Borax and soda can be purchased at the grocery store and it will make plenty for me to give it a try.

Have you had any experience with homemade lye soap or a similarity?  If you did tell me about it, I would love to engage in conversation.

3 thoughts on “Handmade Soap and Washing In The 50’s”