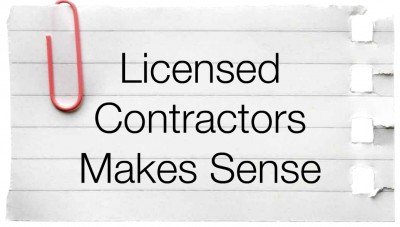 If you’re sick or injured, who do you turn to for help? Do you ask your next door neighbor or do you go straight to the doctor? That’s why it makes sense to hire licensed contractors, too.

If you’re sick or injured, who do you turn to for help? Do you ask your next door neighbor or do you go straight to the doctor? Most of us would do the latter because we know doctors have years of training and experience. Their license to practise medicine proves it.

We go to the doctor because we want the best treatment. Why, then, do we sometimes hire a semi-skilled handyman or even the kid next door to fix something that’s broken in our home or even help us remodel the house? Pressed for an answer, we might say, “To save money,” but is that a sensible reason for not hiring a licensed contractor?

Today we have Adam from “License Trades, Australia to tell a story about this. John (not his real name) had a “simple” job to do. He wanted to knock out an internal wall that divided his kitchen from a hallway. After knocking out the wall, he was going to install an open plan kitchen. To save money, he got out his tools and started knocking out the wall himself. Then, just when he was nearly finished, his saw got stuck halfway through the second-last stud.

Luckily for John, he realised his mistake. He was removing a load bearing wall and was in danger of having his ceiling collapse on top of him. He called a licensed building contractor who was able to erect temporary support before knocking out the wall and replacing it with a beam. After that, John got professional, licensed help for the rest of his kitchen remodel and it lasted his family for ten years.

There are thousands of true stories like John’s, but not all of them have happy endings. Sometimes you can get away with amateur work for awhile, but even when a job seems straightforward to the untrained eye, it can harbor hidden dangers that don’t reveal themselves until it’s too late. If you’re lucky, you’ll just need to hire a skilled contractor to fix your mistake. If you’re not lucky, the mistakes you make can lead to a serious injury or accident.

Like a doctor, a licensed contractor has to go through several steps before they can receive a license. Depending on their trade, those steps can include formal training and/or a long apprenticeship. Then they will have to take a rigorous exam, provide references and show the state license board they are qualified to take on the responsibilities of a contractor in a variety of other ways.

A contractor is not home-free after they have received their license, either. The licenses must be renewed periodically and can be revoked if serious complaints are made against them. They also face heavy fines and/or disciplinary action if they fail to abide by the state license board’s regulations. For example, California’s Contractors State License Board (CSLB) has a zero-tolerance policy towards an electrical contractor “who willfully employs an uncertified electrician to perform work as an electrician.”

Related:
Checklist for Having a Smooth Home Renovation Process
Professionals Every Homeowner Should Have Listed in Their Contacts