What is a mini gastric bypass? 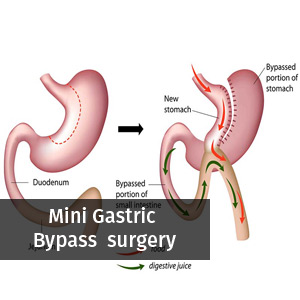 If you need to lose quite a few pounds you may be interested in learning more about a mini gastric bypass. This is a procedure that was developed in 1997 by Dr. Robert Rutledge. The procedure is effective but is a difficult surgery that has a seven percent chance of complications. The rate of death from the procedure, on the other hand, is very low at around 0.5 percent by recent studies.

This type of procedure will decrease the size of the stomach so that you cannot eat as much, thus you will lose weight. The way it works is that it will decrease food absorption as it will bypass close to around six feet of your intestines.

The problem with this type of surgery is that the majority of insurance companies will not cover the surgery and there are not many surgeons that have the training to perform the surgery.

The first step is to divide the stomach via a laparoscopic stapler which means that quite a bit of the stomach is not attached to the esophagus; therefore, it will not receive any food. You will have a smaller stomach that resembles a tube. The next step is to bypass around two to seven feet of the intestines which the surgeon will attach the rest of your intestines to the new smaller stomach. The foods you eat now will go into the small stomach and then will not enter the intestines that were bypassed but the digestive process will still be intact.

Shorter time in the operating room

Less connections of the intestines which aids in fewer complications

Procedure is less work for the trained surgeon

Close to the same amount of weight loss

Close to the same amount of recovery time.

Most patients complain of extreme acid reflux. The reason this occurs is that the stomach is small but the rest of the stomach is attached to the intestine, so it is easier for gastric juices into the new stomach.

You will notice some pain the belly mainly where the incision was done and you will need to stay a night in the hospital to be observed for any complications that might arise.

After you are released from the hospital you will need to be on a liquid diet such as soup for two weeks and then be on a soft food diet for one month before you can return to normal foods. You will still need to follow a diet that includes more fruits, vegetables, and protein.