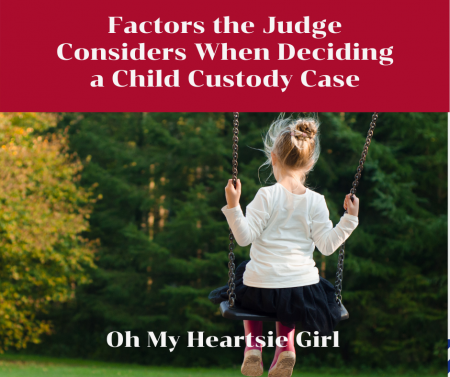 Child custody is by far one of the most difficult issues to resolve in a divorce case. Both parents usually want custody of the kids, and it can be a huge battle to see who wins. It’s important to always keep the child’s best interests in mind when trying to resolve child custody disputes.

What’s best for the child is the main consideration a judge will think of when deciding on child custody matters. That being said, how does a judge decide what the best interests of a child are?

Factors the Judge Considers When Deciding a Child Custody Case

The judge will examine all aspects of a child custody case. They want to be fair to everyone involved, and they want to make sure they are doing right by the child. Children usually need both parents to grow up well adjusted, so most judges will try to ensure that a child spends time with both parents.

Below, are some of the main factors a judge will consider when deciding on child custody.

The employment status of both parents will be looked at. The judge wants to see how the child will be taken care of financially. If you’re unemployed, that doesn’t necessarily mean you won’t get custody of your child. For instance, if you were a stay-at-home parent, you could still get custody when other factors are taken into consideration.

The relationship of each parent with the child will be examined. Which parent provided the majority of care, support, and love for the child? Is the child bonded with one parent more than the other? The judge will not want to damage the bond between a child and their primary caregiver.

The judge will look at whether there were any issues of domestic violence or substance abuse. If the child was abused or in danger from a parent, the abuser will likely not receive custody of the child. That does not mean that the parent can never get custody or visitation. Custody and visitation can be fluid, and you can go back to court when you are more stable if you wish to be a part of your child’s life.

Where the parents live always plays a role in custody matters. If one parent lives far away, the custody will have to be split in a way that allows the child a sense of security and stability.

The judge considers many other factors. These are just a few to give you an idea of what factors could play a role in decisions involving child custody.
[…]
Tips for Teaching Young Children Street Safety
At What Age Can I Place My Child Into Daycare?