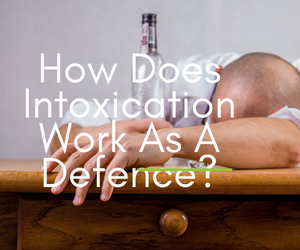 Not everyone is well-versed in the laws and how it affects their daily lives. For this reason, they may not understand what could and could not be in their best interests.

Of course, when you’re intoxicated, no one is thinking about the repercussions of their actions, and that can lead to some dangerous results. But could your intoxication actually help you in the end? Could it be used as a legal defence?

What Is Considered Intoxication?

There are different forms of intoxication that will be discussed later in order to further concrete the concept of intoxication, how it affects a person’s legal standing, and when it can be used. These are voluntary and involuntary intoxication. It’s definitely something that should be raised with your legal defence attorney or sex assault counsel if you are concerned.

How Does Intoxication Work As A Defence?

Intoxication is a defence that can be used by a defendant in criminal law cases. It can be sufficient as a defence for those crimes that require a specific mens rea (state of mind) as an element of the crime. A defendant who is making this defence is claiming that they should not be held liable for a crime because they possessed a compromised mental state at the time the crime was committed.

For example, assault is defined as intentionally putting another person in reasonable apprehension of an imminent harmful or offensive contact, i.e. the act has to be intentional. But for an intoxicated person, that state of intention may not be present and could serve as a defence.

What is Voluntary Intoxication?

What is Involuntary Intoxication?

This is where the defendant was unaware that they were ingesting some intoxicating substance (drink, drug, or other substance), usually through fraud or by force. This is considered a valid defence to a crime, since the defendant didn’t take the substance willingly. A defendant is allowed to admit evidence of his intoxication in these cases to show that he did not understand the wrongfulness of his actions when he was committing the crime.

Intoxication As A Crime

The state of intoxication itself, being under the influence of drugs and/or alcohol, can be charged as a crime. Examples include public intoxication, or DWI/DUI violations.
[…]
How Alcohol Affects the Brain and Behavior
How Alcohol Can Effect Your Beauty and Health