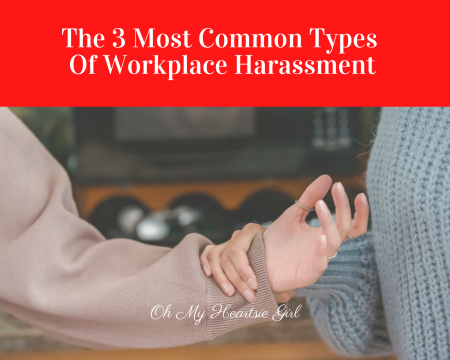 There is a culture of harassment at some workplaces, unfortunately. This makes working a challenge and many often feel that they have to put up with the harassment or risk losing their job. It’s important to understand what harassment is and that you can seek out legal advice for workplace harassment when you identify it in your workplace.

In this article, we will go over several of the types of harassment that you are most likely to encounter at work.

The most common form of harassment comes in the form of sexual harassment. It is mainly directed at women, but there are also men who report having been sexually harassed at work. Sexual harassment is something that doesn’t just have one face. It could be unwelcome sexually laced comments in your presence or even a quid pro quo scenario in which you are asked for sexual favors in return for a promotion or even job security.

The problem with sexual harassment is that it is rarely so obvious as somebody stating that you have to trade sex for security or status at work or face repercussions if you don’t. Generally, it is far vaguer so that there is plausible deniability for the person who is causing the harassment.

Although there is a real fear of enduring repercussions if you file a complaint, if you feel that you are being sexually harassed, you should start documenting everything and file a complaint before the situation worsens.

Bullying, whether it is in person or via the internet, is a real problem at many workplaces. It only takes an atmosphere that is aggressive for some people to think that they can harass their peers or employees into doing things the way that they want.

An example of bullying could be a manager intimidating a team member or the entire team with threats, belittling them in public, and making false allegations about them. The effect is to make it so that people are afraid to not do things the way the harasser wants.

This has a demoralizing effect on the victim and even creates an atmosphere in the office that is toxic and affects everybody there. This type of harassment is also illegal and a complaint can be filed. If it ever gets physical, there could even be criminal charges if there is personal injury or damage to property as a result of the bullying.

Verbal harassment is often chalked up as sexual harassment but it doesn’t have to necessarily be sexual in nature. You can be verbally harassed when there are any type of jokes at your expense, if you are belittled, or feel like you are not able to get your work done due to an abusive coworker or manager.
[…]