When you think of Italy, you usually think of the Colosseum. Or the Leaning Tower of Pisa. Whatever sights spring to mind are well worth seeing. But as a unified country, Italy only formed in 1870. Its fascinating history stretches back centuries before that. That gives you plenty of places to see that aren’t packed with tourists. I’ve gathered 7 of the best places to visit in Italy. You’re covered whether you want the countryside, ancient villages, or quiet islands. Read on to add seven more places to your bucket list. 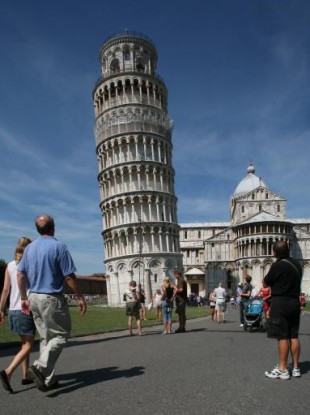 One of the prettiest of the Italian villages, Fiesole is only 8 km away from Florence. It offers spectacular views over the Tuscan city. But it also has charms of its own, away from the bustle of the Ponte Vecchio. Its town hall dates to the Romanesque period. And they still hold events in the Roman theater. Archaeology fans will find plenty to hold their attention, such as the Roman baths. The Etruscan-Roman temple and Etruscan walls are also must-see attractions. Fans of medieval or Renaissance art will like the Bandini Museum. Plus, Florence is literally a short bus ride away. Fiesole makes a great day trip choice on a city break in the area.

Carnivale is just one reason to visit the modern day Republic of Venice. But the city can end up packed with tourists in the summer. Want to see escape the throng and see the origins of Venice? Head to Torcello. It lies beyond the lace-making island of Burano in the North Lagoon. Torcello boasted more than 20,000 inhabitants in its heyday. It’s also where Venice began. Nowadays, it’s a quiet, peaceful island. Catch the number 12 Vaporetto (is a waterbus) to reach it. Torcello’s cathedral is Byzantine-Italian and dates to around 639 AD. Climb the bell tower for fantastic views.

In the early years of Rome, the mighty civilization had a rival. Veii, an Etruscan city-state, lay 17 km away to the northwest. Evidence even suggests the settlement has Bronze Age origins. Despite its might, the Romans wiped out Veii in 396 BC. All that remains are ruins in the Veio Regional Natural Park. Among others, the Porta Ponte Sodo (town gates) date to the 5th century BC. The Tomb of the Ducks dates to the 7th century BC. Sections of the ancient walls still exist too. But you can also see the Villa of Livia, a Roman building, and Isola Farnese, a medieval village.

Pietrapertosa is a gorgeous settlement in the Lucanian Dolomites. It’s also one of the most beautiful towns in Italy. Many believe it dates to the 8th century BC. It’s also built on the bare rock on the side of Monte Impiso in southern Italy. The village spreads along the only road to its 9th-century Saracen castle. Head up to the fortress for truly stunning views. You’ll get a sense of the village’s age among its medieval streets. Trattorias and bars spoil you for choice. Take a thrilling ride on Il Volo dell’Angelo. This is one of the fastest zip lines in Europe. The zip line runs between Pietraportosa and Castelmezzano. It’s the closest you’ll get to flying.

Atrani is one of the best small towns in Italy. It’s also one of the easiest to overlook. You’ll find it on the Amalfi Coast, overlooking the Tyrrhenian Sea. It lies a little over a kilometer to the east of Amalfi. Highly Instagrammable, it’s packed with piazzas, restaurants, and churches. It also lies between two cliffs, giving a dramatic backdrop to the town. Visit the Grotta of Saints cave to see 12th-century frescoes of the four evangelists. Or enjoy the Church of San Salvatore de Birecto, which was once the coronation place of the Doges. We also recommend an evening stroll to enjoy the lights in this medieval hamlet. If you feel like more obvious tourist fare, it’s an hour’s drive from Pompeii. Check out my guide to driving abroad if you’re not used to it.

Torcello isn’t the only island entry on this list. Monte Isola is both the town and the island it sits on. The island lies in Lake Iseo, in the gorgeous Lombardy region. It’s the largest lake island in Europe at 4.28 sq km long. It’s a 90-minute drive from Milan. Though you’ll also need to take a 20-minute ferry trip over the lake. Despite its small size, this picturesque town offers plenty of cafes, B&Bs, and trattorias. Fish is the specialty dish on the menu. The crowning glory is the Madonna della Ceriola chapel at the top of the island’s hill. The summit of Monte Isola is 599m high. If you’re after a spot of exercise, try the 15 km walking and cycling trail around the island.

The Cinque Terre (‘Five Lands’) is the most beautiful of the Italian villages. They lie on the Italian Riviera and date to the 11th century. They’re also a UNESCO Heritage Site. They’re called Riomaggiore, Monterosso al Mare, Corniglia, Vernazza, and Manarola. The rest of Italy only rediscovered them in the 19th century when railroads moved in. You can use the dedicated train line to travel between them. Most visitors come to see their pastel-colored villas. Legends claim fishermen painted them in this way to see them from their fishing boats. In reality, the pastel paint only dates to the 1970s. The villages offer churches, walking trails, piazzas, vineyards, and churchyards. There’s even a nudist beach at Corniglia.

See the Best Places to Visit in Italy

Now you know the best places to visit in Italy. Many of these beautiful sites lie very near the bigger cities like Florence, Venice, and Rome. They make great day trip destinations. If you’d rather experience the real Italy, then they also make ideal places to stay. Make the tourist-packed cities the day trips and save money on accommodation. Make sure you pack your camera and your curiosity. You’ll need both of them in these gorgeous places to visit.

Traveling solo to Italy? Check out this list of tips to have a successful trip.
Related:
10 Tips You Must Do Before Traveling
Staying Healthy While Traveling Abroad
Benefits of Using Gift Cards While Traveling Overseas